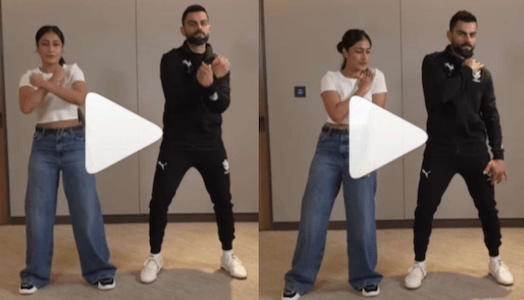 Virat Kohli, the captain of the Royal Challengers Bangalore (RCB), was recently featured in a music video posted on the team's Instagram account. Dhanashree Verma, Yuzvendra Chahal's wife, directed the video. In the now-viral BTS footage, she can be seen teaching Virat the hook-step.

Also Read: Tim Paine Takes Indefinite Mental Health Break After ‘Sexting Scandal’
The top talents from the squad performed the Hustle characteristic dance routine, directed and choreographed by Dhanashree with music by Harsh Upadhyay. The video encourages RCB supporters all across the world to 'Never Give Up and Don't Back Down.’
Also Read: Why DC release Shikhar Dhawan for IPL 2022? Know the players who are retained

Dhanashree Verma stated of her experience directing and choreographing the dance music video, "Working on this film with the RCB players was a blast. After witnessing the RCB players' dedication to their skill in all they do, I grew to appreciate the #PlayBold mentality, which benefits us not just in sports but also in our daily lives. Because RCB is my extended family, I felt it was only right to dedicate this film to each and every member of the team, as well as the thousands of fans that support them.”

The Royal Challengers Bangalore new music video, which was launched on Tuesday, also features AB de Villiers, Glen Maxwell, Mohammad Siraj, Yuzvendra Chahal, and Navdeep Saini swinging a leg.
RCB posted this video to Instagram with the caption, "Royal Challengers Bangalore's spirit of unity and fearless play is being honoured. Thank you to all of our players who proudly wear the RCB colours and give it their best on the field.”