The people of Afghanistan on Sunday took to the streets in their country to express their jubilation at Sri Lanka's victory in Asia Cup 2022. Author : Ujjwal Samrat 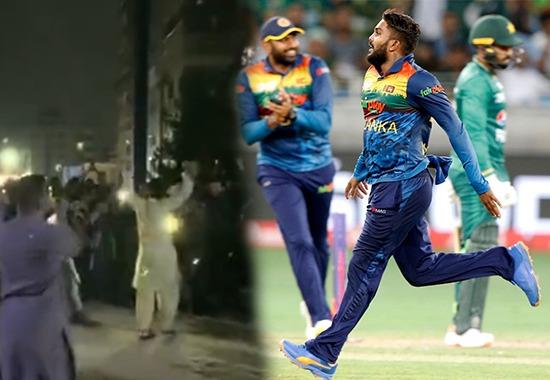 Sri Lanka vs Pakistan Asia Cup 2022 Final ended with the host country (but took place in Dubai) defeating the Babar Azam & Co. by 23 runs and lifting the trophy for the sixth time. Courtesy of Bhanuka Rajapaksa's stellar batting under pressure and Wanindu Hasaranga's bowling, Sri Lanka emerged victorious in the grand Asia Cup 2022 final at the Dubai International Stadium. Although Pakistan's defeat in Asia Cup 2022 final came as sorrow for their fans, their neighbors Afghanistan celebrated Sri Lanka's win on a high. The people of Afghanistan on Sunday took to the streets in their country to express their jubilation at Sri Lanka's victory in Asia Cup 2022. Soon, the video of it went viral on social media.

In the SL vs PAK Asia Cup 2022 Final Afghan fans viral video, it can be seen the people of Afghanistan dancing on the streets of the Taliban-ruled country. Not only this, firecrackers were also burnt by the Afghan fans in order to portray their jubilation on Pakistan's defeat. Interestingly, during the Pakistan vs Afghanistan match at Asia Cup 2022, fans from both nations were involved in a brawl inside the stadium and multiple videos related to it went viral on social media.

Fans of Pakistan and Afghanistan were involved in a violent brawl after the Men in Green defeated Nabi & Co. in Asia Cup 2022. It all started when Pakistan's Asif Ali lost his calm and made a violent gesture against Afghanistan's bowler after he got out. However, Naseem Shah's final over heroics sealed victory for Pakistan. Pakistani fans on this started mocking Afghanistan fans who were inside the stadium. As a result, Afghani fans lost their temper and badly thrashed Pakistani fans over a cricket match. Pakistan's ex-speedster Shoaib Akhtar in fact took it personally and stated that 'Allah Punished Afghanistan' in one of his YouTube channel videos.