One-third of the countries in the world are witnessing a surge in Coronavirus cases, most of which have not inoculated even half of their population with the first dose. 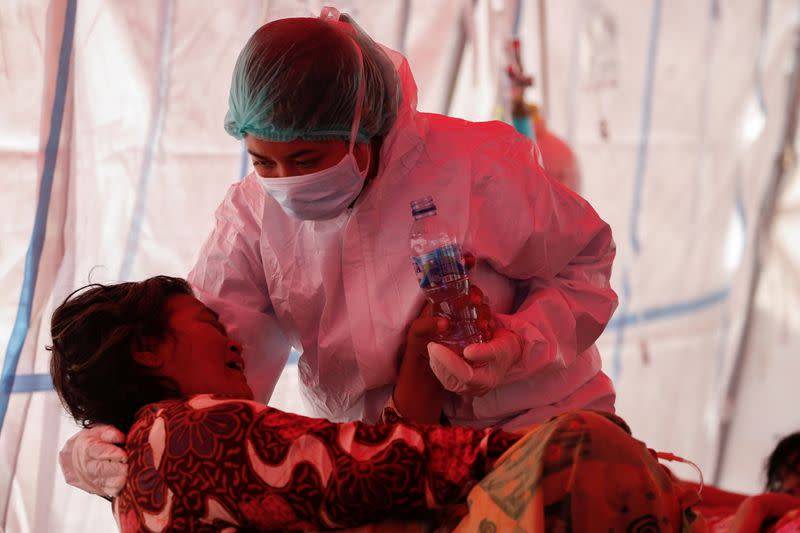 Coronavirus cases worldwide exceeded 200 million on Wednesday, showed a Reuters tally, a Delta variant that is spreading in areas with low vaccination rates and that is straining healthcare systems.

This rise in the global tally in Covid cases is highlighting the widening difference between the vaccination rates between the high and low-income countries.

One-third of the countries in the world are witnessing a surge in Coronavirus cases, most of which have not inoculated even half of their population with a first dose.

On Wednesday the World Health Organization (WHO) asked for halting booster shots of the Covid vaccine until at least 10% of the population in every country was vaccinated with the vaccine against Covid.

The Delta variant is beating every prediction made about the virus and disturbing economies. Disease experts and scientists are working hard to find out whether the new version of the Covid virus is sickening people, especially the unvaccinated; more than ever.

About 2.6 per cent of the world's population has contracted the infection since the outbreak began, with correct figures possibly much higher than shown due to limited testing at several places.

According to an analysis done by Reuters, if the infected people are counted, it would have been the country and eighth-most populous in the world behind Nigeria.

It took over a year for the Coronavirus to reach the 100 million mark, while the next 100 million will be reported in just over six months, said the analysis. The pandemic has killed around 4.4 million people globally.

The nations that are reporting most new cases on an average of seven days, includes the United States, Brazil, Indonesia, India and Iran. All these countries represent about 38% of all global cases reported every single day.

The United States stands for one in every seven infections recorded worldwide. States in the US with low vaccination rates such as Florida and Louisiana are logging record-breaking numbers of Covid-19 with patients getting hospitalised, despite the nation vaccinating around 70% of adults with at least one shot of the vaccine. One of Louisiana hospital's head has cautioned of "darkest days" yet.

Unvaccinated individuals represent roughly 97% of having serious cases, according to the White House COVID-19 Response Team.

Countries in Southeast Asia are also recording the highest daily Covid cases, accounting for just 8% of the world's population; the region is posting nearly 15% of all global cases every day.

A rapid surge in Coronavirus cases has been seen in Indonesia in July where on average most deaths were reported with surpassing 100,000 fatalities on Wednesday. The nation lists one death in every five deaths being recorded each day worldwide. Indonesia is thinking of slowly reopening its economy in September, Health Minister Budi Gunadi Sadikin said on Monday, citing that the infection rate has crossed its peak with daily confirmed cases declining.

India that suffered never before horrific outbreaks of any disease in April and May is once again seeing an increase in the trend of daily cases. Last week, the country logged 44,230 fresh Covid cases, which amounts to more in three weeks. This rise in cases is worrying as experts have indicated about the third wave of the pandemic that has forced the southern state of Kerala to again impose lockdown.

China too has seen an exponential surge in cases after over a year. In Wuhan city where the virus first emerged in 2019, mass testing of people has been ordered by the authorities. About 12 million residents for the Covid virus will be tested after a few cases of Delta variant were detected. No local cases since mid-May were reported since last year.

The Delta variant has become a concerning aspect for most of the nations across the world making them shut down borders and put a pause on flights, which was first detected in India. The variant is highly contagious and spreads like chickenpox and transmits more easily than even the common cold or flu, the CDC has stated in a document.

Explaining a vital issue, Dr Gregory Poland, a vaccine scientist at the Mayo Clinic, says currently vaccines block infection but they cannot block the disease by keeping them from doubling in the nose.

He further explained what happens as a result. He said, "the vaccines we have currently are not going to be the be-all, end-all."

"We are now in a scenario of our own making, where this is going to be years to decades to now defeat. ... And we're going to chase our tail with variants until we get a type of vaccine that offers infection and disease-blocking capabilities," he added.