On Day 3 of the Lord's Test, England bowler James Anderson revealed what Virat Kohli said to him while facing a bouncer onslaught from Jasprit Bumrah. 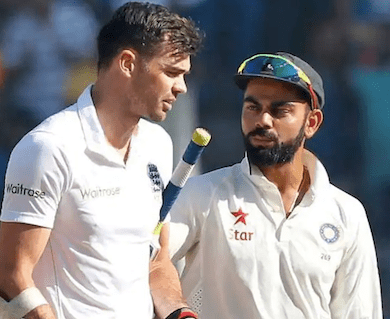 When England's tail-ender James Anderson came out to bat at number 11 in the first innings of the just ended second Test at Lord's, he was met with a harsh reception from Indian bowler Jasprit Bumrah. As he faced some chin music at Lord's, Anderson was greeted with a torrent of bouncers and short balls from Bumrah.
Bumrah's pace took England's pacer off guard, as he was taken aback by the Indian pacester's speed. Anderson, who dislikes facing short balls, recounted what Indian captain Virat Kohli told him during the second Test, when he was exposed to a bouncer barrage by Bumrah.
Bumrah had delivered a ten-ball over to Anderson, with four no-balls and nearly every delivery targeted at his body.
Also Read: Ex-England Cricketer Nick Compton Tweets Against Virat Kohli, Deletes It; Hammered By Fans
“About midway through Jasprit Bumrah's ten-ball over, Virat Kohli approached the stumps to chat with me. He said “you can’t be enjoying this can you?” Anderson shared details of what happened at Lord's in his Telegraph column.
“He (Kohli) was absolutely correct. “Obviously not,” I told him. I've had to deal with a lot of short-pitch bowling. It's no secret that I'm not particularly good at playing bouncer. For example, Mitchell Johnson steaming in around the wicket in Perth was rather delicious," he said.
When England bowler Jasprit Bumrah went out to bat, Anderson was not expecting him to create the type of speed he did. Anderson said that England captain Joe Root informed him that the ball was slow to get off the ground. That was not the case, as Bumrah accelerated his tempo, and Anderson said he couldn't even locate the first ball he encountered.
Also Read: Ind vs Eng Match Controversies: Find out 4 HEATED exchanges that occurred in match ended up in favour of India
“However, the over from Bumrah was up there for intimidation on Saturday at Lord's. It had been said that it was a slow wicket. Joe Root was on the other end of the field as I stepped out to bat. "It's very slow when it's banged in," he explained, "so you can see it quite easily." "Anderson penned the text.
“However, I didn't see the first ball I confronted at all. When it hit me in the head, I was the first to notice it. I simply wanted to get through it unharmed and stay at the crease for Joe when Bumrah had definitely stepped up his pace "he added.
The match between Bumrah and Anderson saw tempers boil on the pitch, and it continued on Day 5 when the Indian paceman was on the receiving end with the bat. During India's second innings, England pacers targeted Bumrah with short balls, striking him twice in the helmet. However, the bowler persevered, scoring an unbeaten 34 to help Mohammed Shami and him put up a game-changing 89-run partnership for the ninth wicket.

In the last two sessions of Day 5, India set a target of 272 runs for England to pursue before bowling them out for 120 runs to win by 151 runs and take a 1-0 lead in the five-match series.