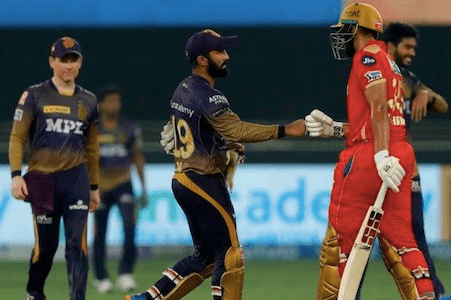 Punjab Kings (PBKS) kept their calm in the last over to defeat Kolkata Knight Riders (KKR) by five wickets in VIVO Indian Premier League (IPL) 2021 Match 45 in Dubai on Friday.

Mayank Agarwal was given an early respite in the chase as KKR captain Eoin Morgan missed a catch off Tim Southee. Mayank then made KKR pay for the respite by slamming three fours and two sixes in the powerplay as he and KL Rahul led PBKS to 46/0.
Also Read: “Baby on the way”: Indian Hockey Olympian Manpreet Singh Announces Pregnancy
In the seventh over, they put up a fifty-run partnership. Varun Chakaravathy removed Mayank for 40 in the ninth over, allowing KKR to break the opening act. While Mayank's replacement in the middle, Nicholas Pooran, gained a life in the 10th over, the left-hander was bowled by Chakaravarthy in the following over.
Also Read: Smriti Mandhana Becomes First Indian Woman to Hit a Ton in Pink-Ball Test, Named ‘Goddess Of Offside’
After 15 overs, KL Rahul, who scored yet another IPL fifty, and Aiden Markram moved PBKS past 120 runs. KKR, on the other hand, fought back, taking two PBKS wickets in the following two overs. While Narine was victorious over Markram, Shivam Mavi was defeated by Deepak Hooda.
Venkatesh Iyer then came close to making an unbelievable grab near the ropes, but he couldn't get the ball high enough to make the catch as Shahrukh Khan blasted a second-ball six. In the next over, Shahrukh smashed a four.
Rahul smashed two fours in the penultimate over before being dismissed for 67 in the last over. After Rahul Tripathi failed to make a tough catch, Shahrukh clinched the victory for PBKS.
Earlier, KKR made two changes to their lineup, replacing Lockie Ferguson and Shivam Mavi with Tim Seifert and Shivam Mavi, while PBKS, who chose to bowl, added Mayank Agarwal, Fabian Allen, and Shahrukh Khan to replace Mandeep Singh, Chris Gayle, and Harpreet Brar.
KKR got off to a quick start, scoring 17 runs in the opening two overs thanks to Shubman Gill and Venkatesh Iyer. Gill, on the other hand, was dismissed in the third over when Arshdeep Singh allowed one through his defence, causing the wood to shake.
In the seventh over, Iyer and Rahul Tripathi kept the scoreboard ticking and put KKR beyond fifty. The two took advantage of every scoring opportunity and put on a quick fifty-run partnership in the ninth over.
While Tripathi smashed two fours off Nathan Ellis in the 11th over, the right-hander was caught in the deep by Ravi Bishnoi in the following over.

In the 13th over, Iyer hit his second fifty of the season as KKR passed 100 runs. Iyer's magnificent innings, however, came to an end two overs later when he was bowled for 67 by Bishnoi.

In the 16th over, Mohammad Shami got Morgan out LBW. Meanwhile, Nitish Rana smashed two fours and two sixes in an 18-ball 31-run cameo.
PBKS, on the other hand, kept things tight in the final two overs, surrendering only 14 runs and restricting KKR to 165/7.