Is David Miller's daughter died due to cancer? The answer is no as the South African cricketer shared the heartbreaking video of his close friend's daughter, Ane who passed away on Saturday. Author : Ujjwal Samrat 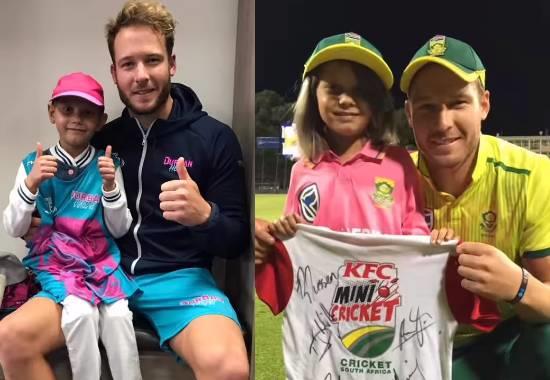 In tragic news, South Africa's stalwart David Miller on Saturday shared a heart-breaking video confirming the death of a young child. David Miller who is currently in Ranchi (India) for the India vs South Africa bilateral series took to his Instagram handle and shared a video of him and a child with an emotional post. As soon as David Miller shared the heartbreaking video on his social media, fans and news media flashed news saying that his daughter has died. Media organizations like DNA, Sports Tiger and many more stated that the post was related to David Miller daughter death. As a result, condolence messages started to pour in for David Miller's daughter death.

However, a few fans lambasted the media organization and the fans for spreading fake news. Many fans pointed out that the emotional post and video is not of David Miller daughter death but of his die-hard young fan who was suffering from cancer. In fact, an online cricket analyst named Mufaddal Vohra, who is also followed by former English cricketer Nasser Husain took to his Twitter handle and wrote, "One of David Miller's biggest fan, Ane passed away. She was close to Miller. Stay strong, @DavidMillerSA12"

Furthermore, another sports journalist stated that David Miller's daughter is not dead as the 33-year-old cricketer shared the emotional video of one of his fans who was suffering from cancer. "She is not his daughter guys. People are spreading this news as David Miller lost his daughter. She was his fan, a well wisher, whom Miller dearly loved. And she lost her battle to cancer."

One of David Miller's biggest fan, Ane passed away. She was close to Miller.

She is not his daughter guys.

People are spreading this news as David Miller lost his daughter.

She was his fan, a well wisher, whom Miller dearly loved.
And she lost her battle to cancer.#rip #davidmiller pic.twitter.com/IlJFX9gffA

Sharing a video of him along with a kid, David Miller wrote, "RIP my little rockstar Love you always!". Furthermore, Miller also shared a story in which he can be seen posing with his daughter in front of the camera. Sharing his picture with his daughter, Miller in his heart-breaking note wrote, "Going to miss you my skut! The biggest heart I have ever known. You took fighting to a different level- always incredibly positive and a smile on your face. A cheeky and mischievous side to you. You embraced every person and every challenge in your journey. You taught me so much about cherishing every single moment in life! I feel humbled to have walked a journey with you. I love you so much."

The southpaw who is currently in red-hot form for South Africa recently played a blistering knock of 106 not out in 47 balls that almost won his side the second T20International against India in Guwahati. Not only this, but Miller also delivered in the India vs South Africa first ODI as he scored an unbeaten 75 runs knock off just 63 balls. Miller is now part of the team that is leading 1-0 in the three-match ODI series. The 33-year-old middle-order batter has represented his country in 147 ODIs and 107 T20Internationals. He is also part of South Africa's squad for the upcoming T20 World Cup. In the IPL 2022, Miller played for Hardik Pandya-led Gujarat Titans.

Now the question arises, whether David Miller's daughter is actually dead or not.

Here's what the news organizations are saying-