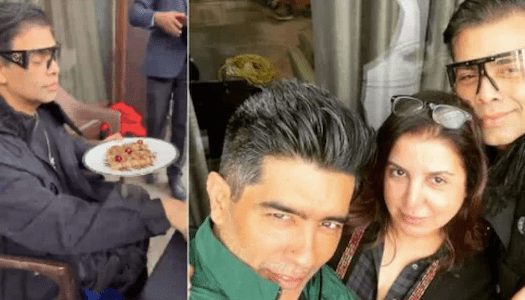 In Delhi, director Karan Johar and choreographer Farah Khan are filming Rocky Aur Rani Ki Prem Kahani. In an Instagram post on Thursday, Farah showed a glimpse of Karan's breakfast. Farah disclosed Karan's 'jawani ka raaz (youth secret)' in a video she shared.
When a chef gives Karan's breakfast in the video, Karan can be seen seated on a chair.

The video begins with Farah saying, “This is what breakfast looks like on a Karan Johar set. Karan what are you eating?”. To this Karan replies, “It's a healthy concoction of things made by Akshay, and it's really giving me all the nutrients, so my skin glows and I look amazing for you Farah." It looked like he was eating a waffle with a lot of toppings. 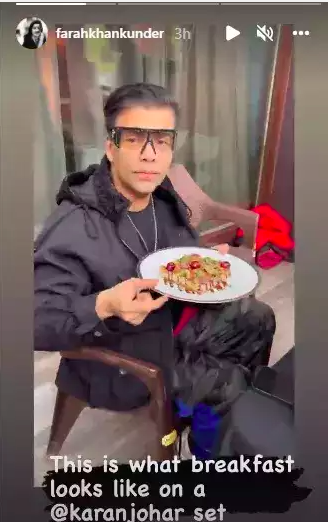 "You are looking amazing," Farah adds, panning the camera to designer Manish Malhotra.  “And the other one is coming, the middle-class boy.”  she adds. "What is this?" Manish says, looking at Karan's plate. "It's my breakfast," Karan says.

After a nine-year separation, Farah and Karan are reunited for Rocky Aur Rani Ki Prem Kahani. The last time the two worked together was in 2012 for Student Of The Year. "I have been really careful about the songs that I choreograph," Farah told about the reunion. There are, however, certain connections that are unique and go beyond the workplace. Karan is one of those people who has a special place in my heart. So, absolutely, I'm quite pleased to return and work on his next album's songs."