Satish Maneshinde on Aryan Khan in Court: ‘Wasn't Even On Cruise, Nothing Found On Him’

Amit Desai, who represents Shah Rukh Khan's son, claims that he did not take narcotics and that nothing was detected on him. 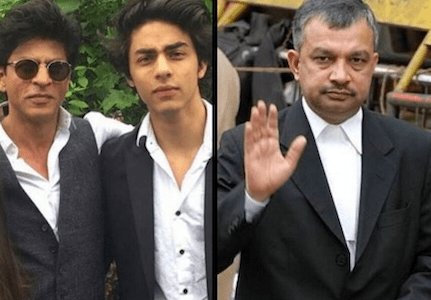 The accusation of drug trafficking against Aryan Khan, who was "not even on the cruise" when anti-drugs authorities raided his home on October 2, is "absurd," his lawyer told a Mumbai court hearing the 23-year-old celebrity son's bail plea in the drugs-on-cruise case. The bail hearing will resume today.

Also Read: Aryan Khan WhatsApp Chats Reveal His Illegal Procurement and Consumption of Hard Drugs: NCB in Court
The Narcotics Control Bureau (NCB) raid began before he had even checked into the cruise, said to Amit Desai, who represents Shah Rukh Khan's son, and he had neither taken drugs nor had anything found on him.

Also Read: Aryan Khan drug case: Pune Police issues lookout circular against NCB’s independent witness Gosavi in fraud case
"The charge of illegal trafficking is ridiculous in and of itself. T his boy who had nothing, he wasn't even on the ship. .  It's a ridiculous and baseless accusation "he stated.
Aryan Khan also "had no cash" aboard the cruise ship, so he couldn't have bought narcotics, according to the lawyer.
In response to the NCB's assertion that Aryan Khan "said he was planning to utilise charas found on Arbaaz Merchant," his defence team claimed that the admissions were pressured.
"The court understands how people are pressured to make these comments," said Amit Desai, a former lawyer for star Salman Khan.
On October 2, Aryan Khan was detained hours after officials from the anti-drugs agency raided a Mumbai cruise ship party in disguise. On October 3, seven people, including his buddy Arbaaz Merchant, were detained.
Mr Desai said that Aryan Khan was pushed into the case despite the fact that the investigations were supposed to focus on narcotics taken or purchased on the ship.
"I like the NCB's cut-and-paste work. The names of the other defendants were not included in the first remand application "Mr. Desai said.
He said the agency then claimed on Aryan's WhatsApp that it had discovered proof of an international narcotics network and sought for his custody to be extended based on the arrest of one individual, Achit Kumar, a suspected drugs supplier.
The NCB filed a statement to the court earlier today regarding its investigations into the charges against Aryan Khan, stating that he and the other accused are linked and that their roles cannot be separated.
The bureau stated that "the components of conspiracy are strong and evident," and that "one of the applicants cannot be regarded in isolation."