Shoaib Akhtar predicted that Team India will also be eliminated from the T20 World Cup 2022 after the semi-final as they are also not 'Tees Maar Khan'. 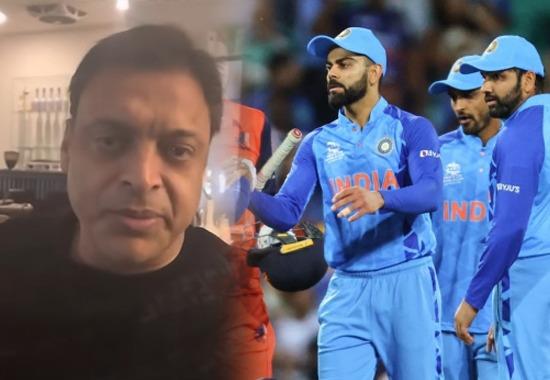 In a major development, Zimbabwe on Thursday defeated Pakistan by 1 run at Perth Stadium in the ongoing T20 World Cup 2022. With this, Zimbabwe pushed Pakistan to the brink of elimination from the T20 World Cup 2022. As soon as Pakistan faced a humiliating defeat from Zimbabwe, cricket experts and fans from all around the world started slamming Babar Azam & Co. Similarly, former Pakistani cricketer Shoaib Akhtar too lambasted Pakistan Cricket Team and its management. However, in order of doing so, Akhtar predicted that Team India will also be eliminated from the T20 World Cup 2022 after the semi-final as they are also not 'Tees Maar Khan'.

Shoaib Akhtar took to his YouTube channel and lambasted Babar Azam & Co for their error in judgment. Akhtar also slammed the Pakistan Cricket Board (PCB) and its chief Ramij Raja for hiring incompetent people around him. Not only this, the former Pakistani speedster slammed PCB Chairman Mohammed Wasim for electing a mediocre team to represent the nation in the T20 World Cup 2022. However, the video which was supposed to be critical at Pakistan Cricket Team, Akhtar pulled Team India into it.

Elimination is now looming over Pakistan after their back-to-back losses, first against India at the MCG then by Zimbabwe at Perth. However, everything is not over for the Pakistan Cricket Team, as there is a slight chance for the Men In Green to qualify for the T20 World Cup 2022 semi-final. Here's what Pakistani fans must know-

T20 World Cup 2022: How Pakistan can still qualify for the semi-final after the defeat from Zimbabwe

- Win all their remaining matches.

- India must win all their matches.

- Zimbabwe to lose at least 2 matches.