Kishore Tiwari, a well-known farmers' rights leader and Shiv Sena politician and state minister, has filed a plea that adds to the political spat over the Aryan Khan drugs case 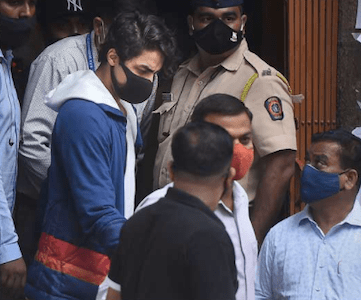 Kishore Tiwari, a Shiv Sena politician and state minister, has filed a plea in connection with the drugs-on-cruise case in which Aryan Khan, Shah Rukh Khan's son, was detained along with seven others earlier this month.
Also Read: SRK’ wife Gauri Khan told staff not to cook sweets in ‘Mannat’ till Aryan Khan’ bail
In a plea to the Supreme Court, a Shiv Sena leader claims that Aryan Khan's fundamental rights are being violated and that he is a victim of a vendetta by a Narcotics Control Bureau (NCB) officer whose wife failed to make it in the film industry.
Also Read: Aryan Khan receives counselling in jail, says “Will make you feel proud of me after I leave”
Kishore Tiwari, a well-known farmers' rights leader and Shiv Sena politician and state minister, has filed a plea that adds to the political spat over the drugs-on-cruise case in which Aryan Khan, Shah Rukh Khan's son, along with seven other people, was detained earlier this month.
The Shiv Sena and the Nationalist Congress Party (NCP), Maharashtra's ruling alliance, have accused the NCB of targeting Aryan Khan on directives from the Centre.
In his plea, Kishore Tiwari accuses the anti-drugs agency of a "dirty vendetta" targeting actors and models, and begs the Supreme Court to intervene and "defend Aryan Khan's fundamental rights.”
The Shiv Sena leader claimed a Mumbai court delaying its judgement on Aryan Khan's bail application till tomorrow due to public holidays had "led to great humiliation" and put the 23-year-old in jail "in an undemocratic and illegal way" for 17 nights.
Uddhav Thackeray, the Sena's leader and the state's chief minister, has previously claimed that the anti-drugs agency was primarily concerned in capturing celebrities.
Since October 8, Aryan Khan has been imprisoned at Mumbai's Arthur Road jail.
Since officers raided a rave party aboard a cruise ship off the coast of Mumbai on its route to Goa on October 2, the NCB has detained 20 individuals. Lawyers for Aryan Khan have insisted that no narcotics were found on him.
"It's really important and painful to mention that it's unbelievable that someone can stay in jail for so long without being arrested for drugs or having any other proof. "There is no consumption since there is no medical record of consumption," Mr Tiwari's appeal stated.
"With the exception of a typical case of abuse of power by one NCB officer, there is total contempt for the principles of Right to Life and personal liberty as legally determined by this court," the petition claims.
The petition asks for a judicial inquiry and investigation into "the malafide role and vendetta style of working of NCB officer whose wife is in competition with other film celebrity/ model against whom NDPS Act action taken by this biased NCB officer,” according to Mr Tiwari, who appears to be referring to the agency's zonal director Sameer Wankhede, whose wife works in the Marathi film industry.
In response to the plea, Maharashtra BJP spokesman Ram Kadam questioned why the Maharashtra government is helping the "drug mafia."
"We have no animosity toward Aryan Khan or any other individual. We like Shah Rukh Khan's talent. But, given the Maharashtra government's backing for the drug mafia and its targeting of the NCB, we'd like to know what the connection is. Is the state government receiving kickbacks? "Mr. Kadam asked.
"Before going to the Supreme Court, the Sena and the state government would have to respond," the BJP leader added.