‘Sexting Scandal’: A look at Tim Paine, his female colleague private text exchanges that got LEAKED

Tim Paine found himself in serious trouble after an unpleasant discussion he had with a woman emerged. 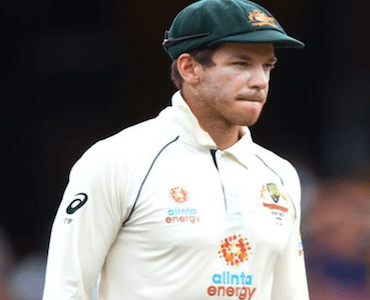 In 2017, the veteran wicketkeeper-batsman was accused of sending an unsolicited sexually graphic photograph to a female coworker. After an examination into the matter, Paine resigned as Test captain, saying that his actions did not satisfy the high standards expected of such a powerful position.

In the case at hand, Paine wrote such explicit communications to a former colleague at Cricket Tasmania on the night of the first Ashes Test in 2017. Paine's return to the Test team after a seven-year absence was notable in that series. According to sources, the women and Paine communicated often over the year. However, the two's correspondence became increasingly flirty.
Also Read: Watch: Know Cricketer Venkatesh Iyer’s Special Request For WWE Star ‘Undertaker’
Tim Paine was married at the time of the incident.
It's worth noting that the cricketer and his wife have been married since 2016. Meanwhile, the Herald Sun learned about the two's text messages. According to the news organisation, the two were flirtatiously texting before Paine texted:"Will you want to taste my *?? F*** me, I'm seriously hard." "I assumed we were resting hands," the woman replied, referring to Paine's wicketkeeping job.
"Can't rest them when I'm this hard!! Need to ease the tension . Finish me off with those lips then (name deleted)". He then sent what is described as an unsolicited "d*** pic" before asking the woman to "finish me off right now!!!" responded the veteran cricketer.
The woman stated that the improper photo had offended her and that she had complained to the Australian Human Rights Commission about alleged sexual harassment as a result of the interaction. After the scandal was exposed four years later, he decided to resign as Australia's captain ahead of the vital Ashes series at home next month. He also expressed sorry for the situation, and during the press conference, he even sobbed.
"Despite being exonerated, I felt terrible about the incident at the time, and I still feel bad about it now. At the time, I spoke with my wife and family, and I am grateful for their forgiveness and support. We assumed that the incident was over and that I could return to focusing only on the team, as I had done for the previous three or four years ""Says the 36-year-old," he says.