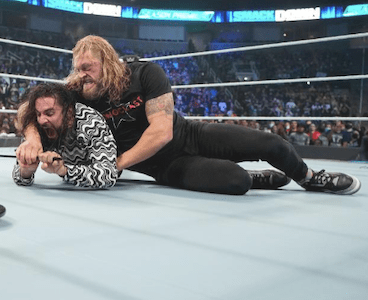 
WWE SmackDown Results:
WWE has promoted so many contract signings that it is sick of saying "contract signing". So this 'Contract Signing' segment was presented as these three ladies - Bianca Belair, Becky Lynch, and Sasha Banks - "making it official."
Bianca Belair demonstrated her superhero-like strength by effortlessly carrying both Sasha Banks and Becky Lynch in a fireman's carry.
Sami Zayn defeated Rey Mysterio
Michael Cole said that Sami Zayn wanted to compete on the King of the Ring stage, but I disagree since the King of the Ring finals are held in Saudi Arabia, and he is Syrian.
This bout was unlike any other Rey Mysterio and/or Dominik Mysterio match in recent memory, since Dominik interfered and unintentionally cost his father the match.
In the second round, Xavier Woods, who has to be regarded the emotional favourite, may meet fellow New Day member Kofi Kingston.
Zelina Vega defeated Toni Storm
Kayla Braxton really questioned Seth Rollins during his backstage interview, "Do you think you went too far by going into Edge's house?" It may have been the most idiotic question ever asked by a backstage interviewer, which is a high standard in WWE.
Since Zelina Vega's comeback, fans have been grumbling that she never wins. Fans are complaining that she defeated Toni Storm and won he match.

Queen’s Crown First Round Match- Carmella defeated Liv Morgan
Thankfully, Carmella kept her mask on throughout the bout, which appears to be garnering some attention for this ever-changing persona.
To this point, the Heels have swept the night, winning 3-0 in tournament contests.
Pat McAfee jokingly commented when MACE was unveiled during a backstage segment, "Big pop for MACE."
Finn Balor defeated Cesaro
There have been zero carbs between Finn Balor and Cesaro, according to Pat McAfee.
Though it happened in a match between two babyfaces, this was the first babyface victory of the night.

Roman Reigns Appears Live WWE SmackDown
This is intended to be a heel gimmick, yet Roman Reigns is constantly acknowledged in every stadium.
Paul Heyman pledged his loyalty to Roman Reigns by assuring Brock Lesnar (at home) that Reigns will defeat him at Crown Jewel. Like a promo wind-up doll, Heyman proceeded to cut a fantastic promo on command.