The narcotics department stated in recent reports that Aryan discussed modes of payment for drug purchase and that they used various 'code names.' 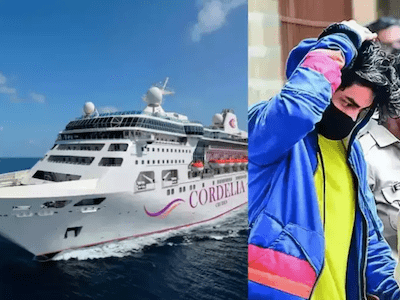 The Narcotics Control Bureau (NCB) is pushing forward with its investigations into the ongoing narcotics case, due to Aryan Khan's complete cooperation in Drugs case.
According to a report by a leading daily, Aryan Khan's and the other accused's cellphones have been sent to a forensic laboratory in Gandhi Nagar for forensic analysis. This comes after the NCB stated in court that "shocking and incriminating" evidence was found in the accused's WhatsApp conversations, indicating connections to international drug trafficking.
Also Read: The tables turned, SRK takes NCB permission to meet son Aryan Khan
The narcotics department even stated in recent reports that Aryan discussed modes of payment for drug purchase and that they used various 'code names.'
Also Read: Aryan Khan Drug Case: NCB Revealed Drug Peddler Dealt in Bitcoin, Took Orders on Dark Web

According to Live Law, NCB's Additional Solicitor General Anil Singh stated that when the ninth culprit in the case, a supplier, was caught from Juhu in Mumbai, the investigating team had acquired narcotics in commercial quantities from the ship.
Also Read: ‘Witch Hunt’: Sussanne Khan dismisses Shobhaa De's comments, lends support to SRK & wife Gauri calling Aryan ‘a good kid’
Singh went on to say that all NDPS offences are non-bailable, citing prior Bombay High Court rulings, including actor Rhea Chakraborty's bail order in a previous narcotics case. He also requested Aryan Khan's detention until October 11 in order to investigate the finance aspect and "unearth the nexus." Meanwhile, the NCB has issued a summons to the ship's CEO for the second time.
Aryan Khan's lawyer Satish Maneshinde delivered his statement aloud in court as a counterargument, claiming that his client had paid nothing to attend the party. His client landed there with a buddy on an invitation from the organisers.
Aryan's lawyer further stated that NCB claimed that when Aryan Khan was overseas, he had certain chats in the phone and they want to break an international drug trafficking racket. Aryan have  been to university for the last year. He was  not engaged in any drug trafficking throughout this time. Even if the offences are non bailable, I am entitled to bail based on Rhea's case.  If evidence is obtained from other suspects, it cannot be foisted against Aryan.
Aryan, SRK's son, stated in court that his bag was checked but nothing was discovered. They seized his phone and began questioning him. Mr Merchant is a friend of his. We were apprehended when the merchant was discovered in possession.
Maneshinde claimed that "Mere chatting on the phone without corroboration doesn't make an offence”.
The NCB detained four additional people on Tuesday in connection with the discovery of illegal narcotics from a cruise ship off the coast of Mumbai. They are employees of Namas'cray, a Delhi-based event management firm. As Aryan khan mobile phone seized by NCB, let’s see if NCB can really found links with international drug trafficking. If this happens, there can be revelations of big names.

Meanwhile, reports say that science books have been handed to Bollywood actor Shahrukh Khan's son Aryan Khan, who has been detained in the custody of the Narcotics Control Bureau (NCB) till October 7. Because home-cooked food is not permitted within the NCB offices, he and the other accused are fed daily at the National Hindu restaurant near the NCB headquarters.

The investigation has resulted in 16 arrests, and it is still going on.