NCB In Court: ‘Aryan Khan is Not First-Time Consumer, Opposes his Bail Plea’

The Narcotics Control Bureau (NCB) rejected Aryan Khan's bail application, claiming that the investigation so far has shown his participation in the plot, illicit drug procurement, and use. 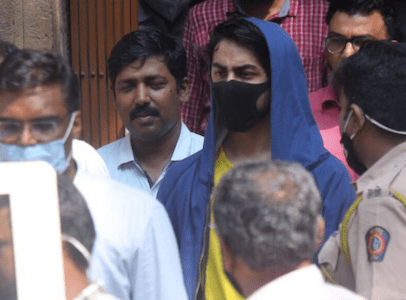 A special court is hearing arguments on Aryan Khan's bail petition, who was detained in connection with the seizure of prohibited narcotics on board a cruise ship off the coast of Mumbai.

Also Read: Byju’s HOLD ON ads featuring Shah Rukh Khan amid Aryan Khan’s drug case
The Narcotics Control Bureau (NCB) rejected Aryan's bail petition on Wednesday, ten days after he was detained along with his friend Arbaaz Merchant and model Munmum Dhamecha. The NCB said the inquiry so far has shown his participation in the conspiracy and illicit purchase of drugs.
Also Read: No “Mannat” for SRK’s son Aryan, surviving on biscuits for four days
The bail hearing for Aryan Khan, which began on Wednesday, is still ongoing today in a Mumbai sessions court. It's his third since his arrest in the Mumbai drugs-on-cruise case roughly two weeks ago.
The anti-narcotics agency said in a statement to the court that Shah Rukh Khan's son Aryan Khan - Accused No. 1 for the Narcotics Control Bureau (NCB) - allegedly "indulged in illicit drug trafficking" and was in contact with "some persons abroad who appear to be a part of an International Drug Network" to procure a "bulk quantity of hard drugs."
The NCB informed the court today that "evidence revealed" Aryan Khan consumed illegal drugs on a regular basis. The central agency's lawyer, Additional Solicitor General Anil Singh, also cited on-the-record comments to suggest that Aryan Khan had been using narcotics for several years.
In response to the NCB's accusations, Aryan Khan's earlier lawyer as well as new lawyer Amit Desai told the Mumbai court on Wednesday that Aryan Khan was "not even on the cruise" raided by NCB officials on October 2, and that the allegation of drug trafficking against him is "absurd."
After a mid-sea narcotics raid on the goa-bound Cordelia cruise ship off the coast of Mumbai on October 2, Aryan Khan, 23, was detained along with his friend Arbaaz Merchant and six others.
Since Friday, he has being held in a Mumbai prison.